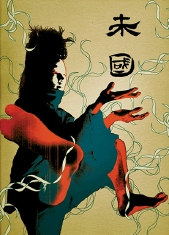 "mi-kuni"
“‘Avant-garde’ lies deep in nature/culture and history of Japan.What I want to show through performances by MI-KUNI is that innovative stage arts come up from regional traditions and native customs of this country.”
Jujiro Maegawa

“Mikuni” is a group of spirited creators including choreographers, dancers, actors, artists and musicians (of both Japanese and Western music), who are active in various artistic fields and share the same philosophy and mindset with the organizer of the group, Jujiro Maegawa.

Through free and cross-fields collaborations, we, members of “Mikuni” are aiming to pursue primitive energies/powers and possibilities of Japan and Asian regions and then, based on what we learned from our activities, produce our works in which arts in different fields are fused and integrated together.

Mi-Kuni – State/style (“Kuni”) which is yet to be born/known (“Mi-”) A state/style being yet to be established --- in other words, being on the verge of its completion

Jujiro Maegawa is a musician and also a performer who was long in coming to the mainstream although having gained substantial supports and sympathies of cultural figures engaging in creation of stages and arts. He is a rough and tough Japanese guy singing unexpectedly fantastic songs based on Japanese myths and fables, in his original way of singing with tremolo, a Japanese folk-song technique and performing which is so unique among present-day musicians.

In the spring of 2002, creators actively working in various fields who sympathized with plays produced by Jujiro Maegawa and came to him to work together. This is the origin of Mikuni. Among them, there were a percussionist playing for distinguished musicians, a principal dancer of New National Ballet Theater, a bamboo flute player who had furthered a discipline as a musician through living a wandering life in Asian countries, a rising new video-picture creator mainly producing CM films, an actor who had impressed the audience in New York with overwhelming presence and an artist who started to show physical performances by breaking away from the wheelchair. The stage of Mikuni is created by such artists with strong personalities.